Future in Past II: Project Summary

The goal was to explore the relationship between repetition and music especially in the context of musical minimalism. Repetition is ubiquitous in the natural world, from various natural patterns such as tree branching to the various cycles in biological process including breathing and heart beat: 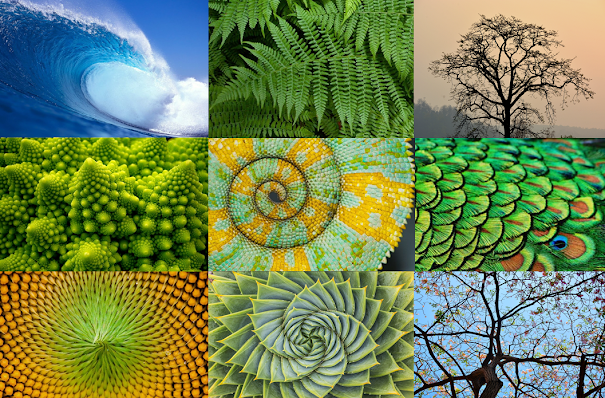 In particular, if the repetition involves identical patterns of different sizes, it is referred to as "fractal". “Fractal geometry” may be defined as hierarchy-based relationships that are created by means of self-similar repetitions, as illustrated by the "L-system" algorithm for generating tree-like fractal patterns:

Since music itself is a hierarchy-based phenomenon capable of repetition, this part of the project thus aimed to investigate the feasibility of creating music using fractal geometry.

Free-style music was created based on fractal patterns created by computer engineer Peter Lin. As such, there is no direct, cause-and-effect relationship between the music and the fractal. However, the music contains polyhythms of 3, 4, 5 and 6 (and even 7 in Stage II) as an attempt to echo the stratification nature of the fractal with a rather satisfactory effect.

Similar music from Part I was used to generate visual "fractal" patterns via an public-domain algorithm using data interpretation using fast Fourier Transformation Matrix adapted for this project with the help of Peter Lin, resulting in some impressive kaleidoscopic results. The patterns, strictly speaking are not actually "fractal" as they are not entirely self-similar/self-repeating, but compared to Part I, there is now a link between the music and the visual patterns.

Upon further research, it was discovered that truly "fractal" music could be created by progressively shortening the duration of a (self-similar) musical fragment. However, such a process has restricted utility as a compositional technique due to the innate limitation of the human perception. For instance, even 3 to 4 levels of diminution would lead to pitches that are occurring faster than 20 beats per second, and would be barely discernible by the human ear. Instead, the music would be perceived as a single pitch of a frequency of 20 Hertz with the original pitches becoming overtones. Nevertheless, the "fractal technique" was attempted in creating the middle section of the "flute suite" of Part 2, with the simultaneous juxtaposition of progressively shorter durations of the same musical segment leading to a "pixelated" effect: 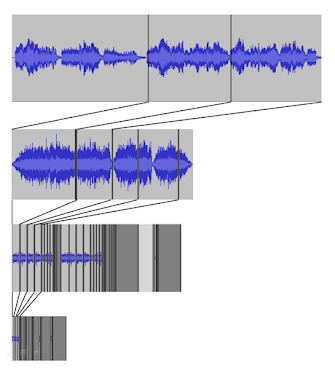 The second part of the project continues with the exploration of the complex, multi-domain relationships and interactions between music and language initiated in Future in Past I (2017), which lies at the core of Chinese music:

In particular, Sonnet 8 by Shakespeare was translated into Chinese in the style of the classical qu 曲   poetry, according to the tone and rhyme schedule of the Feng Ru Song 風入松   ("Wind entering the pines") template: 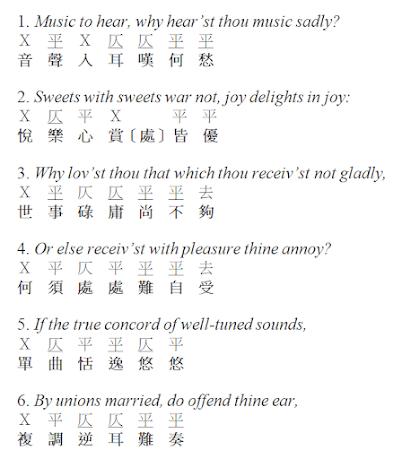 In collaboration with the renowned opera performer, Rui Chen 陳睿, vocal melodies were then created based the tonal nature of the text with respect to musical convention. The result is an aria in the style of traditional Kunqu 崑曲 opera:
Furthermore, a melody for the flute was "reversed engineered" from the vocal melody, and an instrumental postlude or "fantasy suite" was created using the melody using mostly Western compositional techniques, such as cannon/counterpoint, minimalist repetition, and "fractal stratification" as outlined above. The over structural organization of the piece, however, references the traditional practice of qupai 曲牌 manipulation and follows the slow-fast-slow layout of the Tang-dynasty "grand suite" (daqu 大曲):
Together, the recitation, aria and the instrumental pieces can be combined in various ways to create an operatic act, with one possible version shown below. Compared to juxtaposition between Chinese and Western materials in the chamber opera from Future in Past I (2017), the dialogue between East and West here is more nuanced, and is embedded not only within the composition methodology, but also through the simultaneous layering of contrasting materials:
For this project, computer engineer Tony Lee has designed a multi-track media player allowing users to select different combinations of the tracks to listen to:
https://hytonylee.github.io/simple-multitracks-audio-player/
https://hytonylee.github.io/simple-multitracks-audio-player/track2.html
One future goal is to develop an interactive media player which will also allow users to easily manipulate the order of different pieces to create unique versions of the act or suite.

Part 3: Future in Past

The goal of Part 3 was to examine (revisit) the concept of heterophony, which is perhaps the closest phenomenon in the musical realm to fractal geometry, as can be seen in the tree-like branching from the basic gong patterns to the highly rhythmic and complex kotekan interlocking patterns between high-pitch instruments in Indonesian gamelan music: 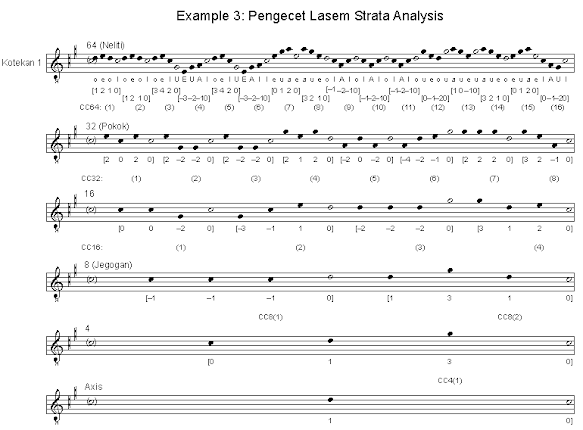 Another notable example is the Japanese gagaku, the world's oldest orchestral tradition, in which part of the repertoire is believed to have been derived from Chinese Tang-dynasty banquet music from the 7th and 8th century AD. Interestingly, the original Chinese tunes (some of which were of Central Asian origin introduced to China via the Silk Road) appeared to have slowed down considerably and become increasingly ornate through time as in the flute and the reed-instrument parts, whereas the original tune are still relatively preserved, for example, in the melodies played by the plucked-string biwa and the shō mouth organ. As such, gagaku in its modern form is essentially a living microcosm encompassing its very own development during the past millennium:

For the final part of the project, one such Chinese tune, Wuchangyue (五常樂; Japanese title: Goshōraku; "Music of the five virtues") was chosen for creative purposes in collaboration with Colleen Lanki, director of TomoeArts and an expert in the traditional nihon buyō and contemporary dance. The music is taken from an online collaboration between the VCME and musicians from Japan and the U.S., and is based on a reconstruction by renowned scholar Prof. Steven Nelson of Hosei University, Japan (premiered at the 2020 VCME International Online Symposium):

In the following video, each image of the dancer (Colleen Lanki) executes gestures and choreography in a similar but not exactly the same fashion as an attempt to capture the essence of heterophony -- a principle of "diversity in unity" and "the unlimited within the limited". The number of images/dancers increases with the entrance of each new instruments, to a total of five (and sometimes more) in reference to the "Five Virtues", which then divides into three major groups of dancers toward the climax, symbolizing the dialogues between past, present, and future, as well as the East and West, echoing the central theme of the project:

Future in Past II: Project Summary

. Part 1: Fractal Music The goal was to explore the relationship between repetition and music especially in the context of musical minimalis...